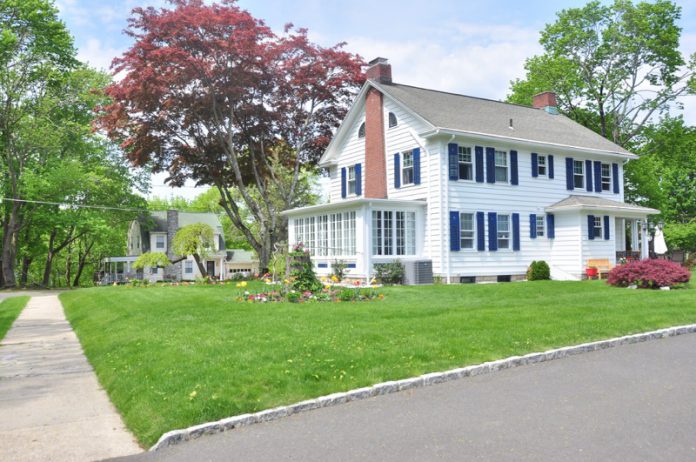 We Americans take pride in our lawns. From erecting fancy lawn architecture to trimming the grass in elaborate patterns, we can’t get enough of it. It’s somewhat of a Sunday ritual, a therapeutic display of mastery over our environment. But have we always been so prideful about our yards?

In this article, we uncover the history of lawns. For such a seemingly boring topic, the history of the lawn is surprisingly rich. Ranging from ancient Greece to English landscape architecture and the American suburb, you won’t yawn while learning about lawns.

Prepare to be on the edge of your seat. We’re taking you on a journey to discover why we spend so much time cutting our grass and installing gazebos.

The western world draws heavily from Greek culture. One of the traditions passed down from the Hellenists is their love of symmetry and equal proportions, which you can see all over the Western world in lawns.

As it pertains to lawns, the Greek’s love of geometry directly influences the lawns you see today. What you may not consider is the close connection the Greeks saw between the two subjects. The Greeks saw the world in harmony when they combined aesthetics with mathematics. In fact, to them, the two were the same.

They harnessed beauty by mastering mathematics. They might not be able to control nature, but they could form art using it. Straight lines, level planes, and perfect circles represent order and you can see these elements in all of their architecture. You can see the same attention to detail throughout western history, and modern landscape design is no exception.

Formal Lawn Design and the English Revolt Against It

It’s easy to take the struggle with nature for granted in the modern world. But for Europeans as far back as the Greeks and the Romans, nature represented imminent threats. That’s why they conformed plants to a geometric layout- it was people’s way of controlling a harsh, chaotic reality.

For example, the Romans used boxwood shrubs (a plant that easily conforms to structures) in their formal gardens to establish a framework for the rest of the garden. The boxwoods didn’t establish a central theme, but they formed the foundation for which the central theme could take shape. Pliny the Younger describes his estate in Tuscany and explains the boxwood hedges divvying the landscape into specific sections, depicting animals and further asserting his dominance over nature.

Throughout the medieval period, as with most other things culture-related, landscape design waned. However, during the Renaissance, Italy brought back formal landscape design on a grand scale. European landscape design culminated during Louis XIV’s reign over France at the classical French garden at Versailles.

However, formal landscape design, reserved for royalty and palaces, began to change with the dawn of the English cottage garden. Alexander Pope, an English poet, was one of the catalysts from this shift to informal lawn design.

Pope advocated for a return to simplistic elements and a more natural decoration style. He didn’t believe there needed to be elaborate designs to foster nature’s beauty. He believed nature was already beautiful and that you could simply add natural elements to the existing landscape to accomplish beauty.

The English cottage movement removed some of the stuffiness about formal landscape design. The English cottage garden was a part of the Romantic movement and a revolt against Classicism. It was an appreciation for the existing order, discipline, and moderation of the natural world.

It placed the European peasantry on a pedestal, previously despised and downtrodden throughout Europe. The peasantry originated and maintained cottage gardens before they became trendy and a sign of affluence. The core of the English cottage garden wasn’t purely aesthetic. It was practical and had culinary as well as medicinal purposes. Fruit trees were an integral component.

However, after the aristocracy caught the trend, this element shifted to incorporate more aesthetically pleasing features. You can see this shift in the influence of landscape painting, perhaps best represented in French impressionist Claude Monet’s paintings.

English cottage gardens influenced the American lawn, but three other distinctive American influences spawned the yard. The first element was Levittown, the most well-known and one of the first cookie-cutter towns in America. Levittown offered built-in lawns for tenants upon move-in.

The second factor promoting lawns in the 50s was the return of GIs. The lawn appealed to GIs, in large part due to their military training. Cleanliness and orderly quarters were imperative for soldiers.

Finally, the element that tied these two factors together was the emergence of lawn care products and technology. With lawn-care technology, a weed-free lawn was possible. Since the 50s, the lawn has been a permanent fixture of American and Canadian culture.

Conclusion- The History of Lawns

There you have it- the reason we spend so much time peering out the window to see if thee bushes are pruned and if the grass needs mowing. The lawn has always been a source of human pride.

From the Greeks and Romans using the lawn as a coping mechanism, to the English extending creating an informal landscape design, and finally, to America, where the middle class could take pride in its land, the lawn has always been an artistic expression of humanity’s struggle with nature, and our attempt to conquer it.

The next time you look out the window, remember why you love that symmetry. Recognize the connection your lawn represents between you and your ancestors, and check yourself when you consider letting those weeds overtake your front yard.

21 Ornamental Plants That Can Grow from Cutting

Ultimate Gardening Guide to Give Your Home a Fresh Look

You can find anything related to home improvement, design, ideas, DIY even Gardening tips. We can ensure you should love all the contents published here. Do not hesitate to share it if you think it is useful for anyone else.
Contact us: [email protected]
© 2019 by HomesFornh