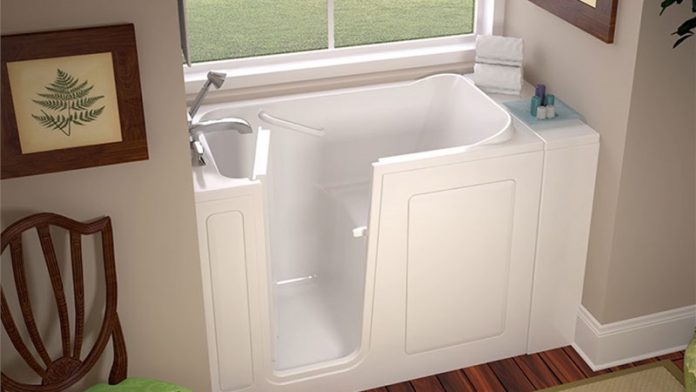 Parkinson’s can be a difficult disease to live with on a daily basis. It can cause tremors (especially in the hands), limb rigidity, and balance problems that make even the simplest of daily tasks nearly impossible. If you’re living with Parkinson’s disease, and your symptoms are making it hard to bathe without help, consider installing a walk-in tub in your home. These bathroom features can make an enormous difference in the lives of Parkinson’s patients. Keep reading to find out how.

The balance troubles and stiff limbs often associated with Parkinson’s disease can make stepping over high ledges extremely difficult. And yet, almost every home in America has at least one high ledge that homeowners must step over on a near-daily basis: their bathtub wall. It’s a movement that most people don’t think twice about, but it’s a different story for Parkinson’s patients. That ledge can be a serious obstacle and a genuine safety hazard.

Levers Instead of Knobs

Once again, grasping a knob is something most people don’t need to think twice about. But if your hands are constantly shaking due to Parkinson’s disease, getting a firm grip on a knob to turn on your bath’s tap can be difficult and frustrating. And, if you turn it on too hot, you might have a hard time adjusting the temperature quickly, possibly causing you to be scalded by hot water!

Walk-in tubs usually use lever-like handles instead of knobs for turning the water on and off. This is much easier to use for people who have limited strength and mobility in their hands—not only Parkinson’s patients, but even individuals who struggle with arthritic joints. Plus, these tubs will often have anti-scald technology, so you have one less thing you need to worry about.

Balance issues make standing for a shower a near impossibility for many Parkinson’s patients, but having the strength to lower yourself into a low seated position for a bath (not to mention getting back up again) might also be out of reach. Walk-in tubs have built-in seats that are at a more accessible height, so you can easily and comfortably bathe on your own again.

Here’s Why DIYing Your Bathroom Renovation is a Bad Idea

24 Fresh Bathroom Ideas : Give Your Bathroom A New Look

You can find anything related to home improvement, design, ideas, DIY even Gardening tips. We can ensure you should love all the contents published here. Do not hesitate to share it if you think it is useful for anyone else.
Contact us: [email protected]
© 2019 by HomesFornh